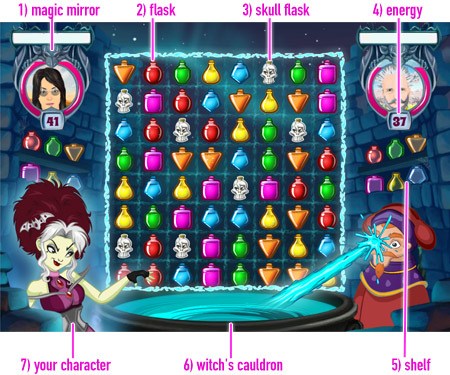 Potion panic is an enthralling combination game in which two figures engage in a magical duel. Slip into the role of the wise magician or the impulsive witch and try to put a hex on your opponent!

Object of the Game

Swap game tiles on the game field to form same colored groups. This will allow you to brew potions that will reduce your opponent's energy to zero.

The following is a short explanation of Potion Panic's key elements:

Along with your name and reflection, the magic mirror shows you your remaining energy.

The normal game tiles in Potion Panic are called flasks. They come in 6 different colors. Form a group of at least 3 same colored flasks and you obtain an ingredient.

Along with the normal flasks are rare skull flasks. Combine these in a group to reduce your opponent's energy.

This is the energy that your figure has at his or her disposal during a magical duel. If it sinks to zero, the game ends.

All the ingredients you collect are kept on your shelf. Whenever the shelf is full, your character brews a magic potion that reduces your opponent's energy.

This is the large pot where the ingredients are combined and transformed into a magical potion.

You choose one of two figures at the beginning of the game: the magician or the witch. Your choice has no influence on the outcome of the game.

A round of Potion Panic is explained in the following:

As soon as the game has loaded, you can choose your character:

The magician is academically trained and brews his potion according to precise formulas.

The witch is more intuitive. She lets her nose guide her when brewing her potions.

Your choice of figure has no impact on the outcome of the game. Your decision therefore brings neither advantages nor disadvantages.

In Potion Panic, you swap adjacent game tiles on the game field in order to form groups of same colored flasks. Click first on one flask and pull it in the direction of the other in order to swap the two.

Once you have formed a group, the flasks disappear from the game field. In their place, an ingredient with a corresponding color appears on your shelf. Each player takes turns doing this.

A group must contain at least 3 flasks located directly next to each other either vertically or horizontally. Diagonal and corner connections do not count.

Whenever the shelf is full, your character brews a powerful magic potion that causes your opponent to lose energy.

You have 5 seconds for each of your turns. As your turn nears its end, your magic mirror will begin to blink red.
Careful: if you are unable to form any groups during your turn, you lose 4 energy points!

Along with the normal flasks are the rare skull flasks or skulls. They can be swapped with other game tiles just like the normal flasks. If you are able to form them into groups, your opponent will lose some of his or her energy.

Form larger groups of flasks or skulls in order to gain other advantages:

Form a group of 4 same colored game tiles and, along with the corresponding ingredient, you get an extra turn!
This means you get another turn directly after this one and can swap another game tile.

Form a group of 5 same colored game tiles and, along with the corresponding ingredient, you get an extra turn!
In addition, 3 random game tiles on the game field transform into skulls.

Every time you collect a group, new game tiles fall into the game field from above. In this way, a chain reaction can form - so-called combos. The player can continue to play during the falling of the tiles and their combination.

Development of the Characters

You can improve your characters in Potion Panic over time. Each magic potion that you brew increases your power:

If you brew enough magic potions in the game, the level of both figures increases!

At the third level of development, the appearance of your character begins to change. His or her increased power becomes more and more visible, seeping from every pore ...

Overview of the Action

The following illustrates the various actions in Potion Panic and their effects:

How the Game Ends

As soon as a character's energy sinks to zero, the game ends immediately.